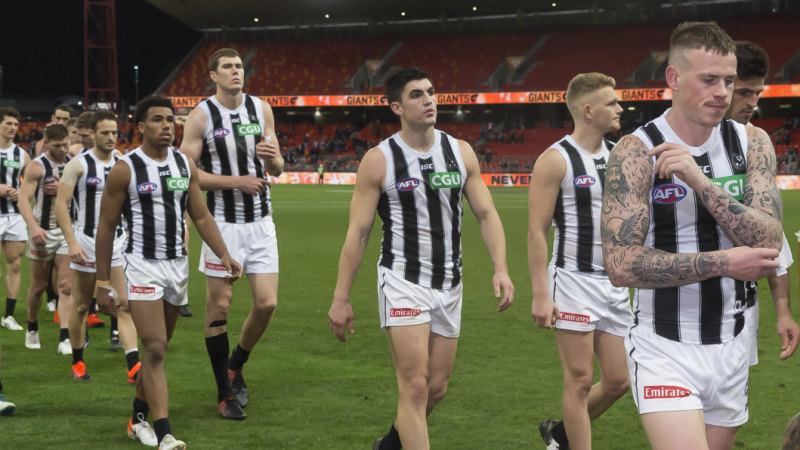 Collingwood coach Nathan Buckley has compared his side's form to a "patchwork quilt" after they backed up their impressive win over West Coast with a limp offering against Greater Western Sydney.

For the first time this year, the Magpies conceded more than 100 points as they slumped to a 47-point defeat to the Giants. The match was effectively won and lost in the opening term as GWS piled on eight goals to one – a barrage the visiting side was powerless to stop, and a deficit they could not make up once they got their own game in working order.

Buckley said his side were far too sloppy with their ball use and wasteful going forward, having ventured inside their attacking arc 14 more times than the Giants but rarely got any joy.

"I thought we hung our backs out to dry in many ways," Buckley said. "We weren't clean enough with the ball and around the contest. You've got to give the Giants credit for their pressure.

"But when they're running out the front door of a contest, it's a pretty difficult position for the backs to be in opposition player with ball in hand without much pressure, against a side as skilful as the Giants are, you're going to make it pretty hard to defend."

Buckley refused to use his side's mounting injuries as an excuse, having lost four members of the team that upset the Eagles in Perth last weekend.

"We were pretty happy with the 22 we put on the park tonight and we're pretty disappointed we didn't get the win," Buckley said.

Barty reclaims number one spot, Andreescu up to fifth