Netanyahu trails rival ahead of scrap to form Israeli coalition

Gantz's Blue and White Party have 33 seats to Likud's 31 in the latest standings from Tuesday's do-over election, according to Israel's Central Elections Committee.Election officials say tallies won't be absolutely final until they have investigated the ballots at 15 polling stations where there were suspected voting irregularities.Gantz has already declared victory in the race, calling on Thursday for a unity government under his leadership.But the crucial next stage in the process will come on Sunday, when Israel's President Reuven Rivlin is set to begin consultations with leaders of all parties and decide who will get the first attempt at forming a government.With 120 seats in the Parliament, both Gantz and Netanyahu need to build a coalition to succeed, giving small parties a vital say in the shape of the next government.Speaking on Israeli radio Friday morning, the Director General of the President's office, Harel Tubi, said Rivlin would not necessarily give the mandate to the leader of the party with the most seats or the most support from the smaller parties.Rather, Tubi said the President would give the mandate to the candidate with the "highest chances of forming a government" — leaving open the prospect he could give it to either man, even though it now appears certain that Gantz's Blue and White party will end up with the most seats.Given the complexities of the current situation, however, it is far from clear that either Netanyahu or Gantz would actually want to go first in the race; many analysts believe it is in both men's interests to see the other man make the initial attempt, on the presumption that a first round of coalition talks will likely end in failure.

Rivlin's talks with party leaders are scheduled to last two days, after which he will appoint one of them to begin formal coalition talks.In the event those talks fail to reach agreement in the maximum allotted six weeks' time, the President would most likely ask the leader of the other main party to have a go. If those talks also end in failure, the prospect of yet another general election — which the Times of Israel has labeled a "nightmare third election scenario" — could become a reality. 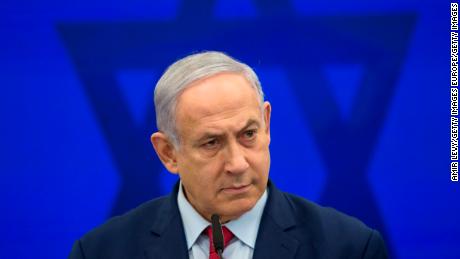 Warning of that possibility on Thursday, Rivlin said he "will do everything I can to prevent another general election.""But the responsibility for this, as well as the responsibility for forming a government that serves all the citizens of Israel with the dedication it deserves, is yours," he said, addressing the country's political leaders."Our current situation, which has gone on for a long time, with a transition government, grievously limits the ability of the government to act and to serve the citizens of Israel, and our ability to face the political, security and economic challenges we face," warned Rivlin.Netanyahu has moved quickly since the elections.First, he announced that he had united the ultra-Orthodox religious and right-wing nationalist parties behind him, giving him a bigger, declared, bloc in Parliament, albeit one that is six seats short of a minority.He followed that up with an appeal to Gantz to join him in a unity government, though that was widely seen as more of an attempt to put pressure on Gantz, rather than a genuine offer.

Israeli press asks where it went wrong for Netanyahu

The battle to form a government comes in the face of ongoing corruption investigations against Prime Minister Netanyahu; he faces possible charges of bribery and breach of trust, pending a final pre-indictment hearing in front of the Attorney General scheduled for the first week of October.He denies the allegations against him but Blue and White says it will not sit in a government with Netanyahu as long as the longtime leader remains under criminal suspicion.A longtime member of Netanyahu's Likud Party told CNN on Thursday that, in his opinRead More – Source