In Colorado, health officials said the supplies they received from the federal government would last "approximately one full day." Ohio officials said they were sending out almost all they had to hospitals — "small boxes," not truckloads. Illinois' governor said he's been bidding against the Federal Emergency Management Agency and foreign countries for supplies. And Michigan Gov. Gretchen Whitmer said the federal government's supplies that went to one hospital in her state were "barely enough to cover one shift at that hospital, not even a full day's worth of shifts.""Our problem has been exacerbated because we're still not getting what we need from the federal government," Whitmer, a Democrat, said.The outcry from state officials demonstrates the tensions between the states and the Trump administration over how medical equipment is being delivered — or not delivered. Several state leaders are pushing President Donald Trump to invoke the Defense Production Act to ramp up outside production for critical materials, and some are fuming that Trump has told the states to figure out equipment on their own.But the wide disparity between the federal government's distribution and the states' requests underscores the jaw-dropping amount of equipment states think they need — millions of masks, gloves, surgical gowns and more — to grapple with a pandemic that has effectively shut down the US economy in an effort to keep the health care system from collapsing with a surge of infected patients. The problem stretches coast to coast, and even the hardest hit states, designated priority "hot spots" by the federal government, say they face life-threatening shortages.Illinois said Monday it had received just a fraction of the supplies it was seeking from the federal government, beyond a face-shield request that was mostly fulfilled. But Democratic Gov. J.B. Pritzker, a target of Trump's Twitter attacks Sunday along with Whitmer, said the state had secured a contract from the federal government for 2.5 million in N95 respirator masks and other vital supplies — though he wouldn't share the price tag.That's because he was concerned about giving that data to other states. Pritzker said he spoke to Trump on Monday about the difficulty in securing contracts when he's competing against the federal government, too."When I call these ventilator manufacturers, and I gave this example to him, in one case they told me I was competing with FEMA to acquire ventilators," Pritzker said. "So they told me I'm competing against the federal government to get ventilators from the state of Illinois. And the federal government is not distributing ventilators to the state of Illinois, so I'm literally working against a competitor."Without a clear accounting of precisely how many ventilators, face masks and personal protective equipment the federal government can provide them, lawmakers on Capitol Hill and governors back in the states say it's impossible to know just how large of a gap states will have to make up on their own. The lack of information about supplies has also meant private businesses aren't sure how big the market will be if they jump in to help. All the while the Trump administration continues to promise states that they will try and help them get what they need.

In a Monday advisory to stakeholders, FEMA said it expected "additional supplies" to be delivered to states "within the next 48 hours." Trump announced at a press briefing Monday evening that FEMA was delivering 8 million N95 respirator masks across the country, along with 73 pallets of personal protective equipment to New York and 36 pallets to Washington state, two of the hardest hit states."We're having millions and millions of masks made as we speak," Trump said at the White House.Vice President Mike Pence held another call Monday with governors to listen to their needs and concerns. One source familiar with the call said it included more governors making requests and federal officials adding them to a list they promised they were working on. Maryland Gov. Larry Hogan, a Republican and head of the National Governors Association, said in an interview with CNN's Jake Tapper that "no state in America" has enough medical equipment. "We're all trying to address that in our individual states and pushing as hard as we can at the federal level," Hogan said. "They have made some progress. The private sector is ramping up. FEMA is starting to deliver some of those supplies out to the states and each of us are making decisions on our own to ramp up production in our states and get things on the open market. It's not a great situation."New York City Mayor Bill de Blasio, whose city has faced the greatest concentration of cases in the US, said he told Trump and Pence the city's hospital system needed to obtain the ventilators it needs within the next week."If we don't get a supply of ventilators quickly, our public hospital system, literally after about a week or so, we will not have enough ventilators to keep people alive who could live through this crisis and could be saved," de Blasio said on CNN's "New Day" Monday. "There's not going to be enough medical personnel in New York … If we don't get all those things, our hospital system will not be able to hold." FEMA, recently designated the lead for federal operations, is working with the Department of Health and Human Services to deliver supplies. A FEMA spokesperson said the distribution of personal protective equipment is "a coordinated effort which includes HHS, FEMA and other federal partners." The administration is also pulling from the Strategic National Stockpile, which is a reserve of medical equipment. The federal government has not provided specific numbers for how much equipment is contained in the Strategic National Stockpile, but it's insufficient on its own to meet states' needs in the rapidly unfolding pandemic. An HHS spokesperson said that the stockpile's role is to "supplement" state and local supplies during health emergencies, and that equipment was being delivered to areas in need "in the most equitable way for a nationwide response," including based on population. HHS has said more supplies are needed to meet states' needs, the spokesperson said, which is why more funding has been requested from Congress. 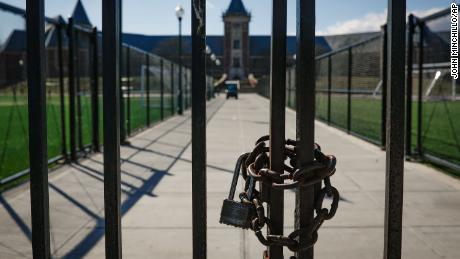 Even the states that are getting the federal government's primary attention say they still aren't receiving the supplies they need in time. "As soon as stuff comes in the door, we send it out the door to meet needs across the state," said Casey Katims, a federal liaison for Washington state. "We'd love to be getting more than what we're getting."California, for instance, received 358,000 N95 masks this past weekend, which represent just 1.7% of the request the state made to the federal government. The government provided California with 854,000 surgical masks, 9% of the state's request; 163,000 face shields, 27% of its request; and 133,000 surgical gowns, 22% of the state's request. The state received more than 470,000 gloves from the federal government, which met 79% of California's ask.

States outside of the three main epicenters of the outbreak in the US — New York, Washington and California — say they are worrRead More – Source