We are publishing personal essays from CNN's global staff as they live and cover the story of Covid-19. Dan Simon is based in San Francisco as a correspondent for CNN.My kids always seem to choose Benihana. The flaming onion, much to my chagrin, never gets old to them! And we always go the same beloved bakery, Susie's, for our cakes. At some point, I'll usually get a little "me" time to play tennis or go for a hike. None of those things happened this year, but in the midst of so much suffering and hardship, I know I should just be grateful to have had one.We're in San Francisco, which on March 16 became the first US city to have a "stay-at-home" order, restricting all but essential activities. A few days later I'd just wrapped up a day's worth of CNN live shots talking about how people were coping, when an alert appeared on my phone — California Gov. Gavin Newsom was telling the whole state to lock down. The emails came flying. "Get your shot back up asap. We need you for the top of Cuomo."As Chris Cuomo and I digested the news on live TV, I rhetorically asked, "What's that going to do to the state's economy?""It's going to tank it," he shot back.Thinking back to that moment, I don't think many had seriously entertained that, within days, similar orders would extend first to California and then to nearly the entire country — and tank the economy nationwide. This was just a couple weeks ago. 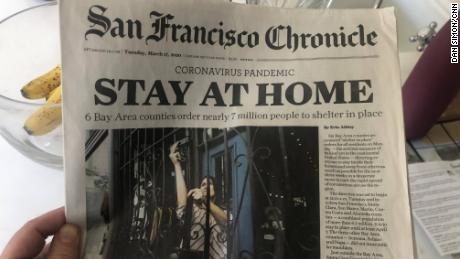 By most accounts, San Franciscans immediately complied with the order and now the early data appears to confirm it. The city has not seen the expected surge of Covid-19 patients. By all accounts, unlike New York and other parts of the country, hospitals are not having difficulty keeping up with ER visits or ICU beds."If I have to attribute it to one thing, it has to be (San Francisco) Mayor London Breed's foresight in calling state of emergency early, getting people to shelter in place early, and really just wonderful messaging of social distancing," said Dr. Jahan Fahimi, an emergency room physician at UCSF.Speaking by FaceTime, as is now customary for interviews, Fahimi said he believed the city has flattened the curve, though city officials say it's still too early to know for sure. 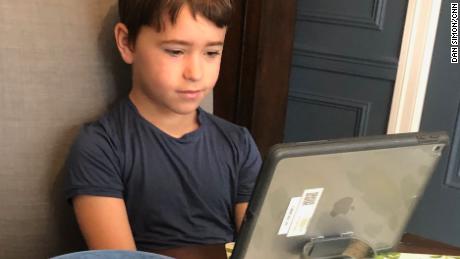 Though nothing seems routine anymore, our house seems to have settled into one.My kids, ages 13, 10 and 8, are getting comfortable with their respective schools' online curriculum. Each has found a little corner of our home — whether it's the kitchen or dining room — to fire up their devices and do Zoom video classes. While I continue my reporting, my wife moves from child to child, overseeing their daily online classes and workload. Like many parents across the country, she's had to become a homeschool teacher on top of all the other demands that come with being a mom. Being a homeschool teacher, I quickly determined, is a much more difficult role than mine. My daughter completed a math assignment and needed to upload a picture of her work to her Google classroom page. "How do I this?" she asked. Hmmm. It seems we're all trying to problem solve — all the time.READ: How 'regular school' parents can homeschool their kids Seeing their teachers and friends on video, I believe, has been a huge source of comfort for all of them.The proverbial "we're all in this together" has never been more true.There has been the occasional mishap around the house. With their extra free time, my kids used some bungee cord to create a sling shot with a sled and accidentally put some big holes in our basement wall. And my wife, unable to go to the salon, tried to color her hair and was horrified by the result. Jet black.If that's the worst of it, we're in really good shape! 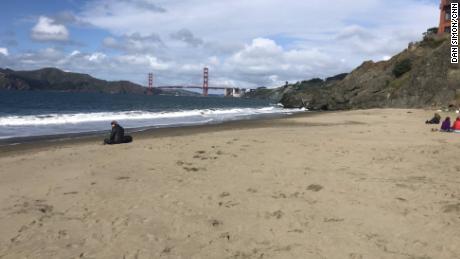 I must say getting around town is a pleasure these days. No traffic. The question is where do you go? It's heartbreaking to see the boarded-up shops and shuttered restaurants. For those that are offering take-out service, lonely staff stand outside of their eateries to let passersby know they're open for business, as I noticed the other day on ChRead More – Source