LISBON — Portugals streets are empty, its beaches cordoned off, the economy asphyxiated — yet there is cautious optimism the country may be pulling off an unlikely victory over the coronavirus.

With a quarter of the population of neighboring Spain, Portugal has around one-tenth of the number of cases. And while its coronavirus mortality rate hovers just above 3 percent, the figure is over 10 percent in Spain, 12 percent in the U.K. and 15 percent in France.

This in a country with more citizens aged over 80 than anywhere in the EU except Italy and Greece, plus a health service thats poorly equipped and underfunded. Portugal has just 4.2 critical care beds per 100,000 people, the lowest in the EU. Spain has over nine such beds per 100,000, Germany almost 30.

“Due to the frailty of our health system it could potentially have been worse here than in Italy or Spain,” said Ricardo Baptista Leite, a physician specialized in infectious diseases and a lawmaker with the opposition Social Democrats (PSD).

“The Portuguese people understood very clearly that if we want to survive this, we would have to do even more than the others in crushing the curve, in prolonging and pushing forward the number of new cases,” he told POLITICO. “The country has shown tremendous solidarity.”

Portugal shut down schools when there were just 245 cases in the country. Spain already had 2,140 infections when most regional governments closed schools.

Explanations for Portugals relative success have ranged from cleaner air to decades of anti-tuberculosis vaccinations and intervention from Our Lady of Fatima.

What seems sure is that luck and geography gave authorities time to take action that decisively slowed the pandemic.

Mainland Europes most westerly nation registered its first coronavirus cases on March 2, a month after the disease appeared in Spain and Italy. That time lag allowed the government to learn from its neighbors mistakes and introduce countermeasures before the virus took a grip.

Portugal shut down schools on March 16 when there were just 245 cases in the country. Spain already had 2,140 infections when most regional governments closed schools on March 12. Italy had over 2,500 cases before students were sent home on March 4.

Madrid also allowed over 100,000 people to attend an International Womens Day march on March 8, while Lisbon banned all public gatherings at an early stage in the epidemics evolution.

The state of emergency putting Portugal on lockdown was declared March 18 when the country had 448 cases. Spain took similar measures three days earlier with almost 10 times more cases; Italy had over 9,000 people infected by the time its nationwide lockdown came on March 10.

“The early implementation of measures can help explain the slower pace of the infection,” said Inês Fronteira, lecturer on international public health at Lisbons Universidade NOVA.

“The lockdowns in Spain and Italy were implemented at more or less the same point; we did it in a phase where there were still not so many cases, which was more effective in reducing the transmission.”

Although the epidemic is concentrated in the north, around the city of Porto, Portugals centralized system of government allowed for rapid nationwide measures rather than the piecemeal regional action adopted elsewhere.

Politicians and health care experts also praise the discipline displayed by the Portuguese people in respecting the lockdown.

Although students flocked to Lisbons beaches when many universities were suddenly shut down on an unseasonably warm early spring day, a realization of the gravity of the situation quickly sunk in.

Portugals lockdown is less strict than in many European countries. Factories and construction sites can stay open. Citizens are permitted daily exercise as well as trips for food and to the pharmacy. Still, most people prefer to stay in. A survey published Sunday showed 51 percent left home only once a week or less.

“From the beginning of this crisis the Portuguese have understood that staying at home is the best way they can support our health workers on the frontlines,” Prime Minister António Costa said in a radio interview Tuesday. “We should celebrate the enormous self-discipline people have shown.”

Unlike in Spain and Italy, Costa hasnt had to contend with sniping from the opposition. Politicians have called a coronavirus truce thats provoked open-mouthed envy in Madrid.

Spains far-left Podemos, junior party in the governing coalition, posted an applause emoji-laden tweet after a speech in which Portugals center-right opposition leader Rui Rio pledged support to the Socialist governments battle to contain the virus. 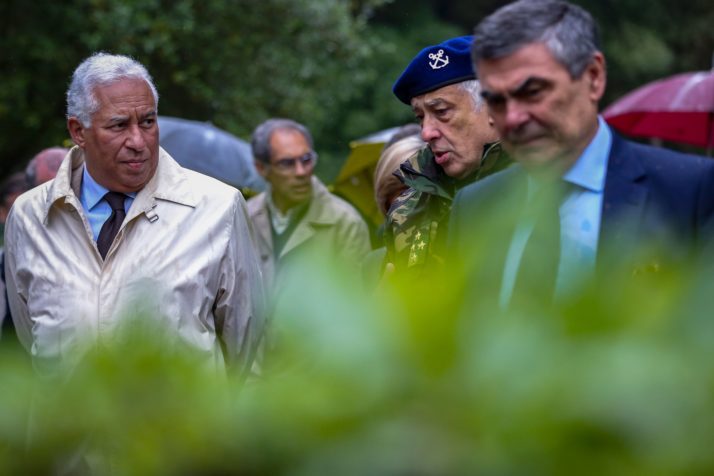 “This is how they do opposition in Portugal … so near and yet so far,” gushed Podemos.

“This is a time for collaboration, not for opposition,” said Baptista Leite of Rios PSD.

“Were no longer dealing with the Socialist government; we are dealing with the government of Portugal,” he said. “We are having very candid but supportive meetings to present constructive criticism and also solutions through back channels, showing a sense of unity for the national interest.”