MOSCOW — Less than a month ago, when Russia had suffered just one death from COVID-19, a state television presenter introduced a guest dressed in green and wearing spiky headgear. “So, when did you first arrive in Moscow?” the presenter asked, referring to the actor as the “coronavirus bug.”

The broadcast — a bizarre blend of dark humor and public health information — aired on March 21 when there were just 253 confirmed cases of coronavirus infections in the country and just days after the Kremlin had assured Russians that the virus was “under control.”

A month on, the joking has stopped, and the Kremlins tone is very different.

Russia may still have fewer reported coronavirus cases than many Western countries with much smaller populations, but there has been a sharp increase since March 23, when the health ministry stripped away red tape that had made it harder for doctors to verify positive tests. The move came after Sergei Sobyanin, Moscows mayor, told Putin in a televised meeting that official health ministry statistics were wildly inaccurate.

As of April 15, Russia has 24,490 confirmed infections and 198 coronavirus-related deaths, the vast majority of them in Moscow. And officials are concerned that things are about to get much worse.

President Vladimir Putin warned that the situation “is changing practically every day, and unfortunately not for the better.”

Dmitry Peskov, the Kremlin spokesman, said this week that hospitals were experiencing a “huge influx” of coronavirus patients. Videos posted on social media at the weekend showed massive lines of ambulances waiting to deliver patients to a hospital near Moscow. One ambulance driver said he had queued for 15 hours.

Speaking this week from his Novo-Ogaryovo residence near Moscow, President Vladimir Putin warned that the situation “is changing practically every day, and unfortunately not for the better.” He also instructed government officials to prepare for “the most complex and extraordinary” scenarios. “We have a lot of problems,” he admitted.

The outbreak has come at a sensitive time for Putin. Last month, the Russian parliament approved constitutional amendments to allow him to stand for two additional six-year terms of office, potentially extending his long rule until 2036. A non-binding plebiscite that the Kremlin hoped would provide the final seal of approval for the move was scheduled for April 22. It has now been postponed.

Putin, who celebrated 20 years in power on New Years Eve, was due to step down as president in 2024, at the end of his current term. Lawmakers said the decision to allow him to rule for another 16 years was necessary for national security, including amid the global coronavirus outbreak.

“Based on the challenges and the threats that exist in the world, oil and gas are not our strengths,” Vyacheslav Volodin, the parliamentary speaker, said last month. “Our strength is Putin.” State television echoed his words, telling viewers there was no viable alternative to the ex-KGB officer.

Yet as the number of coronavirus cases in Russia rises with each passing day, the president has played a low-key role, delegating much of the responsibility for handling the crisis to regional officials. It was Sobyanin, Moscows dour mayor, who announced a citywide lockdown that went into effect on March 30, and Mikhail Mishustin, the newly appointed prime minister, who oversaw the rollout of similar measures across the country.

“Putin doesnt have gut feeling for this,” said Konstantin Gaaze, a political analyst at the Carnegie Moscow Center. “He is OK with sharing some authority, because he himself doesnt know what is right and wrong in the current circumstances.”

Other analysts suggest that Putin is wary of issuing lockdown orders that Russians may not comply with. Moscows 12 million residents are only allowed to leave their homes for medical emergencies, to shop for essential goods, take the rubbish out, or walk pets within 100 meters of their homes. Jogging and all other forms of outdoor exercise are forbidden.

“Putin knowns that orders become meaningless when they are not obeyed,” said Anna Arutunyan, a Russia analyst at the International Crisis Group. “To issue orders that people will not obey erodes ones power. For Putin, that is existential.”

Putin may also be concerned about being associated with failure. From Wednesday, anyone travelling to work by car or public transport in Moscow is required to apply for a digital permit in advance.

The system was widely criticized after videos emerged of crowds waiting in line to present their permits to police officers at the entrances to metro stations across the city. Alexei Navalny, a prominent opposition leader, blamed the fiasco on what he called the “criminals and idiots” in positions of power and called for Sobyanins dismissal. 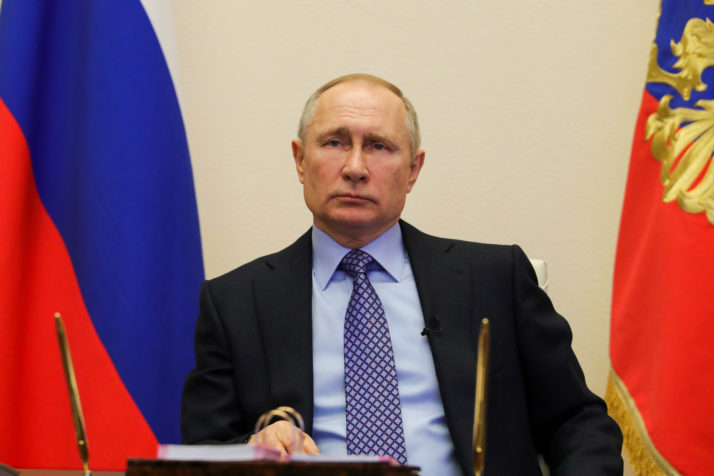 Opposition figures are also keeping a careful eye on measures being introduced to tackle the outbreak. This month, Russias parliament passed a law stipulating up to three years in prison for anyone who causes “mass infections” after flouting self-isolation rules. Those whose actions lead to deaths face up to seven years behind bars. Anyone distributing “fake news” about the virus can also be jailed for up to five years.

Rights activists also fear the advanced surveillance technologies being used by Moscow and other Russian regions to keep track of citizens during the pandemic could later be used to clamp down on opposition activists.

“The less advanced a countrys civil society, the more chance there is that governments will keep these total surveillance systems in place after the pandemic,” said Stanislav Shakirov, an activist at Roskomsvoboda, an internet rights group. “The pandemic gives new opportunities to Big Brother.”

There has been mystery and speculation as to the presidents exact whereabouts during the pandemic. Some critics suggested that a series of national addresses were filmed on the same day and then rolled out slowly by state media.

In one video, broadcast by national television, Putin was seen shaking hands with two government officials at the Kremlin in a meeting that officials said took place on April 7. The video was aired after Putins spokesman had said the president was working remotely from his Novo-Ogaryovo residence and that he had given up handshakes.

He told private companies to continue paying their employees, but offered no meaningful state support, offloading responsibility instead onto regional officials.

One of the officials in the video also referred to an event in early March as having taken place “last week.” Oleg Kashin, a Russian journalist, suggested that the footage had been filmed weeks ago and kept in reserve.

Wherever he is seeing out the epidemic, Putin appears to have been hitting the history books. On April 8, he left Russians scratching their heads when he compared the coronavirus to nomadic tribes from the 10th and 11th centuries.

“Everything passes, and this too will pass,” Putin said. “Our country has gone through many serious tests: The Pechenegs tormented it, and the Cumans too. Russia defeated all of them. We will also defeat this coronavirus infection,” Putin said.