Spring storm to bring snow to the Northeast

An early spring snowstorm is expected to move off the coast of southern New England Monday night and into Tuesday, putting around 6 million people under winter storm warnings and advisories in the interior Northeast and New England, CNN meteorologist Monica Garrett said.The Adirondacks, Berkshires, Catskills, Green and White mountains could see heavy snow, more than 6 inches in some places. Areas in the valley could see more than 2.5 inches, Garrett said, and lower elevations inland, from New Jersey to Connecticut, could see up to an inch of snow. The Mid-Atlantic may escape the snow, but is still expected to be drenched by moderate to heavy rain. Coastal cities including New York and Boston will see mainly rain with the possibility of snow mixing in at times, Garrett said. Earlier models showed two different possible tracks and two potential outcomes. The European model is forecasting the storm to be stronger and to track closer to the northeastern coastline. This will lead to higher snowfall for interior portions of the Northeast, higher rainfall for big coastal cities, and stronger winds. Interior portions of the Northeast could get 6 to 12 inches of spring snow. Coastal regions could see 1 to 3 inches of rain which could lead to flooding.The American model is showing a weaker storm that is further off the coast, this will lead to less snow, rain, and weaker winds across the Northeast through Tuesday. The only areas that see snow in this scenario are higher elevations of the Green, White, and Adirondack mountains. 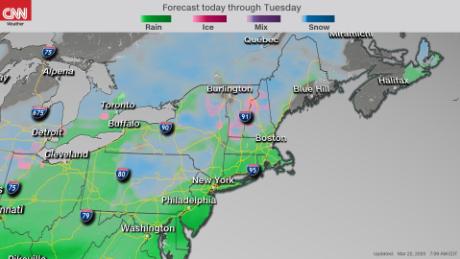 The European model brings the storm closer to the "Benchmark," but the American model takes it well east of that. The Benchmark is a locator term referring to latitude and longitude of 40 degrees NortRead More – Source