Messi cries amid his farewell conference 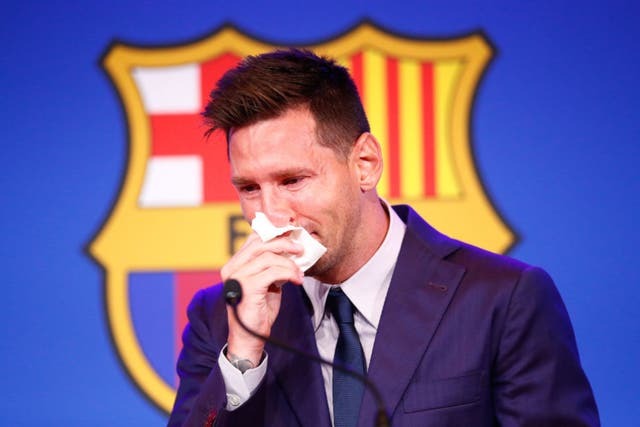 Messi appeared at the conference this morning with intense emotions prevailing the place. His 21-year spell with Barca made this farewell overwhelming.

The club on Thursday announced the unimaginable to Barca fans—yet to the world. “Leo Messi will not continue with FC Barcelona.”

The 34-year-old, while crying, expressed his immense gratitude to the club.

A journalist asked Messi about his next destination, and the latter stated, “PSG is one possibility, but nothing is confirmed yet.”

Leo added, “I received a lot of calls. Many clubs are interested.”

In the conference, Messi received plenty of questions, most of which were about his moments in the club and the city.

When asked about the sudden leave, Leo said, “No, it was not false hopes. We all were hoping and convinced I am going to stay.”

He added, “La Liga is the reason.”

Messi and his Barca friends meet at a final dinner

Following the earth-shaking news, the legend of the club hosted his friends on a farewell dinner.

The Spanish club has been living rough times for three seasons—at least. That caused a financial crisis in the club, especially after the corrupted administration of Bartomeu left.

This announced, media started to circulate rumours around his next destination, with PSG the most likely to sign La Bulga.

According to Marca, newcomer Aguero, Busquets, Pique, and Alba gathered in the dinner and Ibai Llanos, the YouTube star.

“All the best in whatever comes, my friend,” said Aguero on his IG picture with Messi, “And always with that smile. I love you pa.”

The two Argentina internationals will not have the chance to play together. Now with Messi leaving, a heavy burden will fall on Aguero in terms of scoring goals.