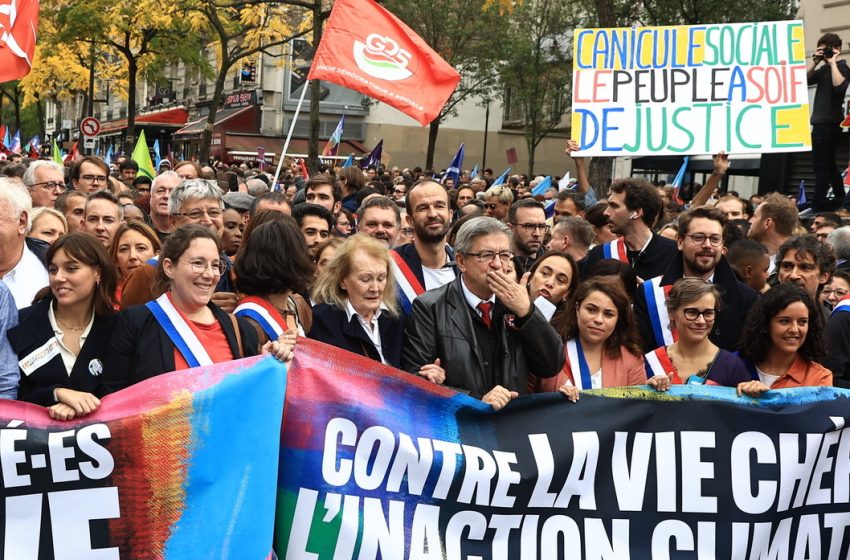 Paris, Europe Brief News – Thousands of protesters took into the streets of Paris to demand higher wages to keep up with inflation.

The protest came a part of a nationwide day of walkouts and transport strikes by train drivers and other public sector employees that caused major commuter disruption.

The protest was organized by Jean-Luc Melenchon, a former presidential candidate and leader of the left-wing France Unbowed (LFI) party. A number of other leftist parties and organizations participated, with some calling on President Emmanuel Macron to take stronger action against climate change.

However, economic concerns are first and foremost on the minds of protesters. “It’s not the march of Mr. Melenchon,” the LFI leader told France 3 TV on Sunday morning.

Britain also witnessed similar protests over growing discontent with the spiralling cost of living which threatens to unleash political turmoil.

Earlier Monday, thousands of protesters took into London streets, calling for a general election amid the worsening cost-of-living crisis.

Under the slogan the “Britain is Broken”, thousands of protesters participated in the march. They demanded immediate general elections, action on low pay, and the repeal of “anti-union” employment laws.

Similar protests have also been taking place in Berlin in recent weeks, sometimes leading to isolated reports of violence.

That includes businesses, the bloc’s 447 million citizens and of course, themselves.